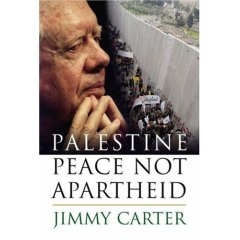 President Jimmy Carter’s courageous new book, Palestine: Peace Not Apartheid, is due on bookstore shelves November 14, 2006. In it, Carter reportedly states, "Israel’s continued control and colonization of Palestinian land have been the primary obstacles to a comprehensive peace agreement." As a result of such excerpts – and the title itself – Democrats in the U.S. Congress made significant efforts in October to distance themselves from their former leader who nevertheless maintains his standing as the conscience of the party.